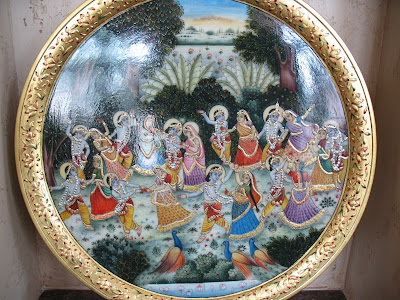 Hare Krishna so last night we had a very nice program in Amarillo Texas, a town that is only really known for the their consumption of cows. Our host Rakesh Shah and his wife and family kindly invited us from the Dallas temple to do a Janmastami program at the Hindu temple that they helped develop. Rakesh Prabhu, a radiologist whose parents became initiated disciples of HH Tamal Krishna Goswami when he was just a young boy, works with the Hindu community of Amarillo and regularly invites devotees from our temple in Dallas to come and host programs at their temple in Amarillo. We arrived Saturday at 1pm from a 1 hour flight from Dallas. Our host Rakesh, who sponored our flight kindly picked us up and took us to his beautiful house. In his house he had the beautiful deities of Sri Sri Radha Krishna and also he had very nice art of Krishna throughout the house as well. 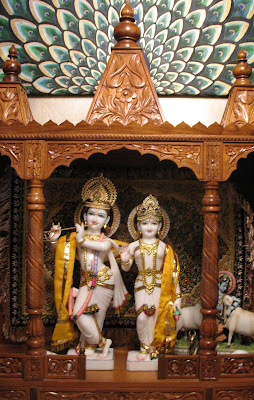 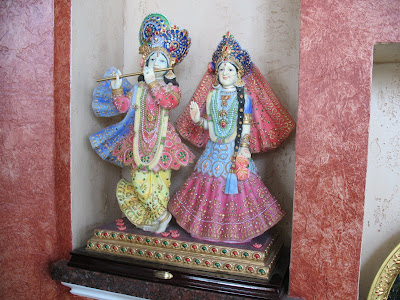 At 5:15 we took our leave to the temple and arrived there 15 minutes later. At the temple we were very nicely received by all the guest, mostly Gujarati families of doctors and lawyers. We had a three hour time slot so we decided to break the program in a way to keep everyones attentioned fully enlivened. What we did is that we would have a bhajan for about 15 to 20 minutes lead by Haridas sporting his dad’s portable Aindra harmonium (nicknamed by Aindra Prabhu himselfScreaming Babies), accompanied by Kapil who is wonderful with mrdanga. This would be followed by me speaking about the pastimes of Krishna for about 15 to 20, I spoke a little from the Garga Samhita of Garga Muni which has many wonderful pastimes including the pastime of the Devas going to Vaikuntha to request the Lord’s assistance. In that journey upon reaching Goloka, the door keeper, a girl by the name of ShatakaChandrana asked the Devas, "From which universe may I know that you are coming from so that I may inform the Lord of your arrival?" Confused by this statement the Devas replied, "The one and only universe," the doorkeeper laughed, but the wise Lord Vishnu of our realm who was accompanying the Devas replied, "We are coming from the universe where the eternal Prishnigarbha has descended, the universe where Lord Trivikrama has broke with the tip of his toe nail and thus the Ganga flowing in" 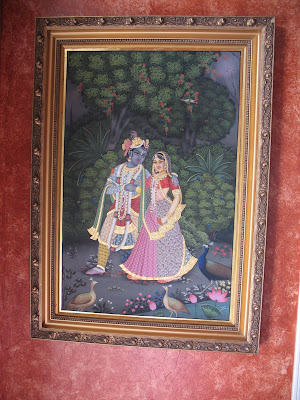 These pastimes were intersperced with the philosophy of Lord Krishna and covered such topics such as meat eating, persons claiming to be God, and impersonalism. So after a 15 min discussion we would again return back to the bhajan and everyone in the temple sang enthusastically.

Over 200 guests showed up for the program and it appeared to be a great success. We ended with a final class on the Bhagavad gita. There is a point that I have been repeating in my discussions lately this week, something that both Srila Prabhupada and Srila Visvanatha Cakravarti Thakur discuss in their purports to the Srimad Bhagavad Gita Chapter 4 verses 6-9. Krishna says that he comes to protect His devotees but later in Bhagavad Gita Krishna states mam ca yo vyabhi charena bhakti yoga sevate sa gunan samatityatan brahma bhuyaya kalpate that one who engages in devotional service, bhakti, is already saved already free from the modes of material nature. So what does it mean, paritranaya sadhunam, if by bhakti alone the sadhus are already saved. The conclusion given is that Krishna descends to appease His devotees who suffer in absence of the Lord. That is how sweet the relationship is with the Lord. This is one of the conculsions of this verse of Bhagavad gita. This verse, mam ca yo vyabhi charena also refutes the paradigm of castism because simply by engaging in service fully on becomes transcendental to the brahmana what to speak of the other classes, varnas.

This was then followed by a kirtan along with Jhulan Yatra, the swing festival, when we swing Radha and Krishna on a beautifully decorated swing. Both Haridas and myself lead this kirtan and it lasted a good 45 minutes being that their was so many people in line to partake in the swing festival. After the kirtan one gentleman approached me and asked that he had read that in the Vedas sometimes it is mentioned that there was this or that person who ate meat. My response was that neither the Vedas nor infact any traditional system of religion, such as Christianity, Muslim, or Hinduism, none of them, support the unrestricted slaughter of animals. In the Vedas, if a man wanted to eat flesh he would first sacrifice a goat in front of the deity of Kali and before killing the animal would chant, "in this life I am killing you, and in my next life you shall kill me." Also the brahmanas of the past were very powerful, sacrificing an old animal into the fire they could cause that same animal to appear out fire with a new youthful body. He seemed satisfied with the answer. Haridas and Kapil when back to the house to rest and I ended the night with dramatical Krishna story telling with all the youngins. 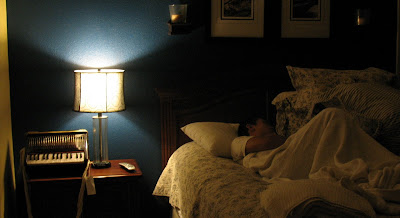 Our host mentioned that the turn out and response was fantastic, they all loved to hear and chant about that Most Attractive One, Sri Krishna.