All glories to Śrīla Prabhupāda

Yesterday I mentioned my doubt about the eko bahu syam verse.  My understanding is that this verse is in relation to the material world. In the following purport to CC Adi 6.14-15 it seems to hint at that, although the verse is not directly quoted.

All glories to Śrīla Prabhupāda

Yesterday I mentioned my doubt about the eko bahu syam verse.  My understanding is that this verse is in relation to the material world. In the following purport to CC Adi 6.14-15 it seems to hint at that, although the verse is not directly quoted.

"He desired to expand Himself into many living entities, and with such a desire He first created a vast expanse of water within the universal space and then impregnated that water with living entities.”

In addition to that there are the extensive commentaries on the first verse of the catur ślokī, aham evasam evagre. ‘It was I in the past, and only I in the future, and I in the present.’

In the commentaries the acharyas present that I in the past means with associates and abode. Then sastra is quoted that the abode and associates exist prior to this creation and are transcendental to it.

However the way that this verse is sometimes quoted seems to indicate some sort of creation or existential aspect of Krishna existing alone at some point. Which doesn’t seem correct to me. Perhaps it is an acintya subject and therefore cannot be understood by plain philosophy.  I do not know if there is any commentary on that verse to give a clear indication as to what it is regards to.

The way that I see it is that the Lord and his abode is a confidential subject and those subjects are not always directly spoken about in the Vedas and are rather more intimately revealed in books like Śrīmad Bhāgavatam.  So in this verse it is speaking just in regards to the material realm, Maha Visnu impregnating the pradhana.  Please let me know how you understand it. Thank you. 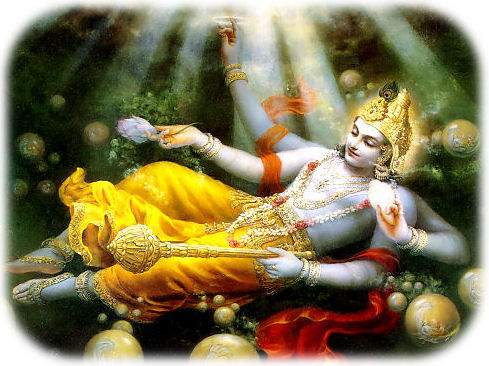 When you first approached me with your question, I thought to share with you the following passage, and having read your letter now, I still think the passage is relevant. It is an excerpt from a talk that Srila Prabhupada gave in NYC in 1967, which was later edited and rendered as the Introduction to CC.

"Radha and Krsna are one, and when Krsna desires to enjoy pleasure, He manifests Himself as Radharani. The spiritual exchange of love between Radha and Krsna is the actual display of Krsna’s internal pleasure potency. Although we speak of ‘when’ Krsna desires, just when He did desire we cannot say. We only speak in this way because in conditioned life we take it that everything has a beginning; however, in spiritual life everything is absolute, and so there is neither beginning nor end. Yet in order to understand that Radha and Krsna are one and that They also become divided, the question ‘When?’ automatically comes to mind. When Krsna desired to enjoy His pleasure potency, He manifested Himself in the separate form of Radharani, and when He wanted to understand Himself through the agency of Radha, He united with Radharani, and that unification is called Lord Caitanya. This is all explained by Srila Krsnadasa Kaviraja in the fifth verse of the Caitanya-caritamrta."

And incidentally, I thought your presentation of the question and your discussion of it were very thoughtful and thought-provoking. Thank you very much.

May this meet you in good health and enthusiastic spirits.

Yours in service to Srila Prabhupada,
Giriraj Swami