Śrīla Prabhupāda’s kirtan leading was always very meditative, deep, and focused.   He would often end in a crescendo but it was steady, long, and unrushed. 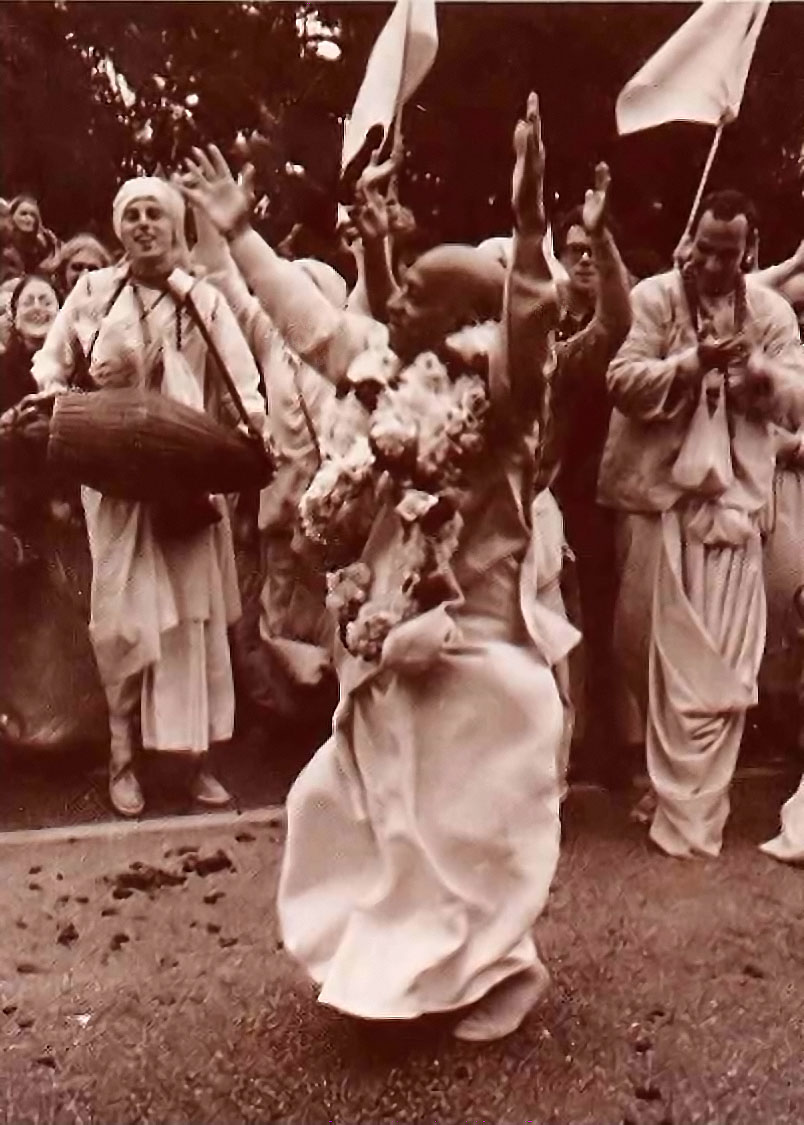 Śrīla Prabhupāda’s kirtan leading was always very meditative, deep, and focused.   He would often end in a crescendo but it was steady, long, and unrushed.

“Gaura Gopala: I was right next to Prabhupada through the whole ceremony, playing the drum. He particularly liked to sing one tune through the whole time. He put his hands up in the air. He was dancing.” Ref. VedaBase => SPL 44: Let There Be a Temple

”It was clanging and banging. Kīrtana should be sweet and melodious.”

We had a kīrtana at the Rāma-līlā grounds, 1976 March, and Dīnanātha was leading, and tens

of thousands were attending and chanting. After the program Śrīla Prabhupāda and I were alone

in the back tent waiting for his servant and the car. As you know, he would often ask rhetorical

questions, and he asked me, “So, what did you think of the kīrtana?” Understanding this was

just a lead-in to his giving me an instruction, I answered with a bland “It was OK.”

Śrīla Prabhupāda’s definition to me then was as follows: “No, it was not nice. It was clanging

and banging. Kīrtana should be sweet and melodious. Come let us go to the ashram and have

And so we went — Śrīla Prabhupāda, his servant, Baradrāj, and myself. Except for his servant,

Prabhupāda, and we had a long kīrtana. . . . On Śrīla Prabhupāda’s signal, the kīrtana ended. He

looked at me, smiling, shaking his head a little, and said, “So . . . sweet and melodious.” And

then he moved on with the rest of preaching and hearing. I had heard him say, and heard that

he also said, sometimes stopping kīrtana, “No screaming and shouting.” [remembrance by

I personally feel that if one becomes more focused on the Holy Name of Krishna with love and worry less on changing the melody their leading of kirtan will become more and more ecstatic.   This is especially in the case of those who are new to leading kirtan or who are not regular kirtan leaders.  In their nervousness or anxiety, they change the melody, perhaps thinking that others are bored.  This changing of melody may happen over 6 times in just a 15 minute period.  (BTW I not talking about the different parts of a melody but rather changing to completely different melodies)  Whereas kirtan stalwarts such as Indradyumna Swami, BB Govinda Swami, Madhava Prabhu and others keep it very steady and focused.

Once I noticed a devotee chant Hare Krishna for the 30 minute Sandhya Ārati for a total of 2 minutes.  First he sang the standard Gaura Arati song and then the Hare Krishna Mantra for 2 minutes. (he also completely changed to different melodies within that 2 minute period)  Then he stopped chanting the Hare Krishna Maha Mantra because he wanted to leave enough room for Jāya’ing at the end of the

kirtan.   Śrīla Prabhupāda never was Jāya’er himself, so it is not actually necessary to do a Jāya session at the end of kirtan.  But the main thing is not to Jāya at the expensive of the Hare Krishna Maha Mantra.

It is called the Maha Mantra for a reason, it is the greatest mantra.   So my basic advice to new kirtan leaders is to keep steady the melody, even

the parts of the melody should be steady, don’t shift it back and forth every few mantras and then run out tricks 2 minutes later.

So all the best to you.  One simple item to test the efficacy of the one’s kirtan is to see if it creates smaraṇaṁ, even on a material level.  Will those who have heard it have it dancing through their minds throughout the rest of the day?  From śravaṇaṁ & kīrtanam comes smaraṇaṁ, rememberance.