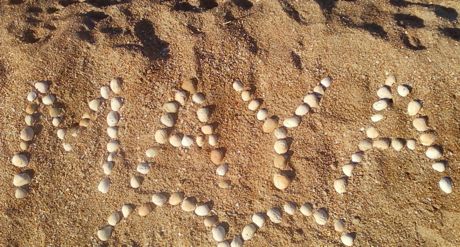 On a recent beach japa walk I saw a large, unleashed dog headed my way, one of those “I’m-mad-as-hell-about-being-so-ugly” breeds. People walking unleashed dogs is a pet peeve of mine (get it?), and especially when those people’s pets resemble man-eating gargoyles. This particular creature’s clueless human companion also bore an unfortunate resemblance to her slobbering, four-legged lethal weapon, and I was not pleased to see either of them. I made a mental note: “Take concealed weapons course and bring loaded revolver on future walks”.

I had been enjoying a relatively carefree, barefoot japa walk, requiring little or no navigational skill, on nice, flat sand (most of our beach is composed of rolling hills of needle-like, foot-puncturing shell shards). But now to avoid a bloody confrontation I slipped on my Crocs and headed for the dunes, giving a wide berth for Horrid and Leashless to pass me by.

Once they were apparently out of attack range, I came down from the shell pile to resume my barefoot-ness. Two seconds after removing my sandals, some upturned syringe of a shell buried itself in my foot, causing me to break out in a sweat and shout something not on any list of Holy Names. The pain went all the way up to my eyebrow.

Whatever had pierced me was so remarkably small and flesh-toned that it was several minutes before I could find or extricate it. Fingernails could find no purchase, teeth were out of the question, and I had no surgical instruments on me. Just as I was thinking I ought to bring a first aid kit on future walks, including tweezers et cetera, I saw Devil Dog and its keeper heading back my way.

D.D. had locked his terrible jaws around some rotten, red, moldy plastic beach flotsam and was shaking it as if it was someone’s Achilles tendon. In the process, somehow the “toy” got stuck around its paw and he couldn’t shake himself loose. When he started whimpering, Mrs. Gargoyle noticed her canine pal wasn’t keeping up, and went back to free him from his flotsam, which Mr. Dogness immediately grabbed again to resume shaking the life out of it and growling.

It’s humbling to realize there’s not a whole lot of difference between yourself and a dog, except that the dog is following its own dharma perfectly.