Off to see the family in San Clemente this morning.   It it my nephew’s Kai’s first birthday.  So we rented a car with some help from my mom and drove down there to see all the family.  Kai is the son of my cousin Malia, she was the chief editor for Surfers Magazine and her husband the main underwater photographer. This is her with my Uncle Doug I am blessed to have a nice family that is not uncomfortable with vegetarianism and Krishna Consciousness in general.   We spent the afternoon there and as time went on it turned into a big baby fest.  There was about a total of 14 babies that showed up with all their parents.  It was very nice but as time went on began to worry about making it back for the famous Saturday Night Harinama held on Santa Monica Promenade.

So around 4pm we left to drive back to Los Angeles. At the temple we met up with some of the devotees and began to head down to harinam spot. There was some confusion this year however where the harinama would be.  There was some discussion that the party would be split.   One at the beach and one at the Promenade.  We heard that one at the beach was finished so we ventured to regular harinam at the Promenade.  When we got there devotees were enthusiastic but they had no amplification, it seemed that their equipment failed.  As we chanted and danced we noticed more and more devotees showing up for the harinam.  Many smiling faces were seen amongst the crowd of on lookers and it very joyful.

This morning I was fortunate to attend the mangala artik which takes place at 4:30am every morning.  This program is always refreshing for the heart.  Some time after the program we returned back to the hotel so that Visakha could nap.  However we could not make it when attempting to return to the temple for the Guru Puja at 7am.  I was quite upset about this because I missed a really nice kirtan and as Krishna states in the Bhagavad Gita 2.63 "From anger, complete delusion arises, and from delusion bewilderment of memory."  My old friend Vrajendra Prabhu came by and showed me the studio where he teaches Iyengar yoga classes across the street from the temple.  Some time after coming back from the yoga studio I noticed that my bead bad was missing.  I swore that I had not had my bead bag since I was in the temple room, so my disturbed mind convinced me that someone must have moved it, or perhaps even had stolen it.  I wandered all over place asking for help, but no one had seen it.  I called the my phone repeatedly which was with the bead bag.  I was not only lamenting the loss of by chanting beads, but also my cell phone as well.  After repeated calls my phone was then turned off and immediately the calls were going to voicemail.  This confirmed my suspicions that my bead bag was stolen.  Finally some intelligent soul suggested that I watch the camera recorded footage.  I was able to track down Mayapursasi Prabhu after some time and I begged him it he could help me.  Even though this was probably one of his busiest days of the year he agreed to help this silly soul.  So with his expertise we were able to find the crook.  It was me!!!  Actually it was anger which stole away my intelligence.  I watched myself walk over to Vrajendra’s yoga studio bead bag in hand and walk back empty handed.   One of the yoga instructors had turned off the phone because it was disturbing the class.

I was greatly relieved, and took some resolution to heart to be more careful with my sacred japa beads. We headed to the ecstatic festival.  As like every year we got to see Bhakta Milo.  Milo is the blue haired boy who shows up for Ratha Yatra every year.  Although he is 15 years old he has been to 12 or more Ratha Yatras.  This is really interesting because he parents are not devotees of Krishna and neither has been to temple very much, but he always makes a point to come to the festival every year and dance in the Harinam Kirtan.

The kirtan to the park was absolutely great and the park festival was amazing.  So many attractions, so many different ways that people can learn about Krishna.  Dramas, kirtans, bands, dances, food, philosophy.   So many fun things to participate in. 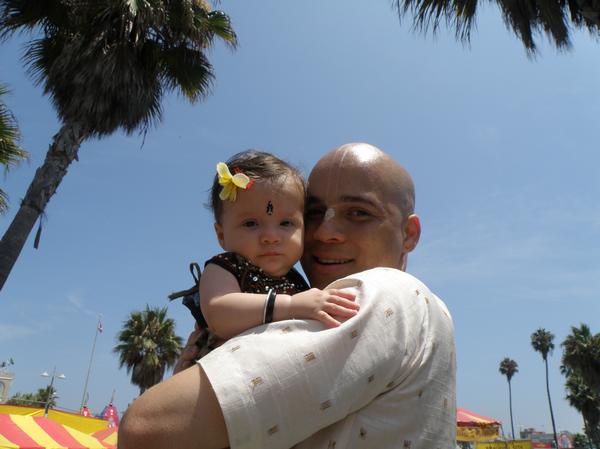 Visakha in particular was extremely fond of the strawberry smoothies.  It was her first smoothie and she truly relished it. 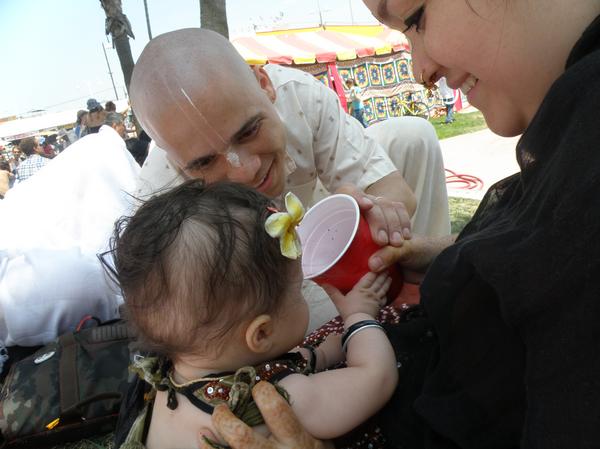 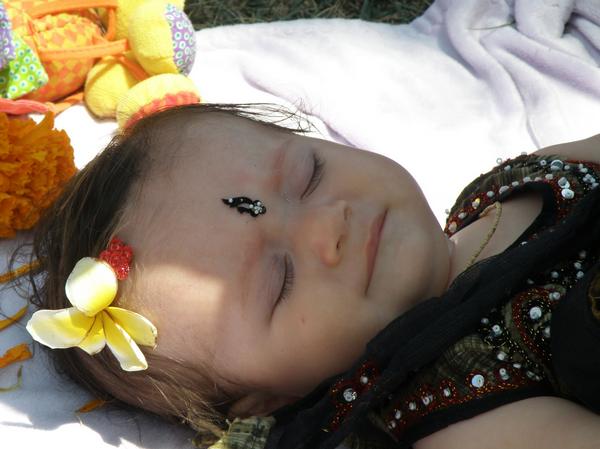 p.s. last 3 photos are by Dalia, she is a great photographer you can see some her work here DaliaShiva.com

Love the photos of your moon-faced baby girl. Thanks for stopping by my blog and commenting. I really should write and read more often on Krishna.com, instead of spending so much time on Facebook! Hope you and your family are well. Hare Krishna.

here is a video from the devotee comedian Benloka about facebook.