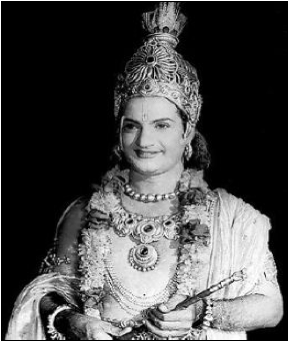 A funny thing about Andra Pradesh and other states in South India, they have this saying. "We do not know what Krishna looks like. If someone thinks of Krishna the face that they see is that of NTR, Nandamuri Taraka Rama Rao."

A funny thing about Andra Pradesh and other states in South India, they have this saying. "We do not know what Krishna looks like. If someone thinks of Krishna the face that they see is that of NTR, Nandamuri Taraka Rama Rao."

NT Rama Rao is my favorite actor. He is the star of South India Vaishnava films of the 50’s and 60’s. His main roles in the films were that of Krishna and Rama but he has also played many other roles as Ravana, Karna, Duryodhan, Bhima, and many others. He also played other roles in later film such as the Bollywood version of Superman.

In the 80’s he started his own political party and due to his fame was voted in as Chief Minister in Andhra Pradesh. He won by a landslide, people used to actually do artik to his photo. His venture in politics did not last long as he was more of an actor than a politician.

There is something very powerful about seeing a story on film. For example I have read of the lives of the Six Goswami of Vrindavan but it is hard for me to remember individually their different stories. Must be my Kali yuga brain. Seeing these stories on film implant them into my mind.

Similarly whenever I see a movie unrelated to Krishna is also is very hard for me to remove such impression on my mind.

I plan to get some more films with NTR, not all of them are subtitled, so that I can get the impressions of Krishna’s lila in my mind.

Seeing movies and TV serials of the Lord’s Lilas makes a big impact, and its easy to absorb and keep. There have been several

My most recent favorite is the TV serial "Krishna Kathayein" by Ramanand Sagar. Based on the Bhagvatam of course, made after a careful research on teachings of Lord Chaitanya, Vallabhacharyaji, Surdas and other saints.

I agree, more than reading or listening, what we see register fastly in our mind. In this today’s world(Kali yuga) there are unnecessary things shown on tv, but they do have some time to show the Mahabharat and Ramayana.. and also for kids they have cartoon shows about Krishna, Rama…

So even kids do learn about our sweet butter thief 🙂

Now its our responsibility to make them see and understand the good things around us and enjoy their life. I have been to ISKCON, Bangalore and even there they have Krishna cartoon shows…

We do have opportunity to bring up our kids in a right way and the main thing how we effectively use those precious options, since its very hard to make kids understand few things in this world else they may be attracted on the wrong side.

Sorry if i sound different but those who see Krishna as some face they saw on TV actually are not increasing their krishna Consciousness to reach higher levels. It is sure to understand and start your journey there, but after reading Geeta so many times and the discription which ‘Geeta As It Is’ gives when Sri Krishna shows his VIRAT ROOP to Arjuna bewilders me and forces me to imagne something which is beyond my imagnation. At times I feel I have make an image in my mind yet I feel Krishna Bhagawan is mush more then where my imagination has reached. The Super Soul who connects every living thing and non living thing and even takes ether as part of Soul , we need to discuss our imaginations combine them together and understand HIM and help each other towards Krishna Consciousness.

Sorry if you have not liked my view. I am new at Krishna.com but have always been with Krishna.

Hello Jitender, no one here is to say whether you are wrong or correct. we are here to share our ideas and enjoy the blessings of our lord.

My idea on this topic was concentrated as whether the people around us get the knowledge of our sweet krishna rather than the communication used. Just think how will an illiterate people can read Geetha and understand everything, atleast by seeing such shows they will get to know of the Supreme and kindly note most of the people in our country are illiterate due to the economic condition. Please think in general and not specific to one person. You may be blessed with good wealth but you cant expect the same with the person who are travelling with you.

Sorry if my comments hurts you in anyways. This is just my opinion.