Whenever tragedy strikes and innocents and children are harmed the natural question arises.  Where was God?  If there is is a God how can there be tragedy?  Is God capable but unaware?  Is God unaware but capable?  Or is God compassionate at all?  Such questions should be addressed rather than pushed aside in an effort to protect blind faith.

Whenever tragedy strikes and innocents and children are harmed the natural question arises.  Where was God?  If there is is a God how can there be tragedy?  Is God capable but unaware?  Is God unaware but capable?  Or is God compassionate at all?  Such questions should be addressed rather than pushed aside in an effort to protect blind faith.

When I was young boy I had a sister who although born completely healthy, had suffered some hospital caused complication and nearly died.  However her survival was short lived as the complications caused brain damage and her tiny body was only able to endure two more years.  This all took place I think when I was about 11 years old.
Events such as these, wherein someone who has yet to even commit any harm is harmed, brings up the question.  What is the justice of God? Also known as Theodicy.   A major catastrophe does not need to be in effect for the question to arise, anyone can see the apparent differences in wealth, health, peace, faith and intelligence that a human is faced with right from birth.  Some born healthy some not.  Some born wealthy some one.  Some born in a religious social setting and some in places where the concept of God does not exist.
What is God’s responsibility?  A provider has a natural responsibility for his dependents.  Even a store manager is held accountable for the behavior of his employees.  So when one of God’s prime employees, Mother Nature, kicks our butt, who do we go to for accountability?
This question of accountability has plagued various religions.  As so far I have not seen any tradition that accept the born soul paradigm, the idea that the soul is born with body,  deal with this question in a satisfactory way.  However the Bhakti tradition, the ancient Vedic tradition from India gives a clear picture as to why a person may suffer even before they have done any sin.  The concept of reincarnation takes into account that we all have lived many many lives and also have a great stock of karma, reactions, good and bad, from our previous lives.   According to the Bhakti tradition God is the perfect protector.  No one can enjoy or suffer anything that is not within their destiny due to previous deeds.  And although someone be placed in lands or circumstances with people of similar karmic debts, such as the reaction of a airplane crash or earthquake, there is no value judgment.  Much unlike the recent Youtube video of young religious fanatic who prayed for atheist to suffer, the Vaishnava, or true theist is pained at others suffering and pleased at other happiness.   The devotee of the Lord, the Vaishnava, understands without judgment that they themselves have stocks of debts as well.  Anyone who is in this world has debts from their previous lives.  Therefore the compassionate devotees, and the Lord Himself, do not condemn but rather are ever diligent to help souls from suffering. 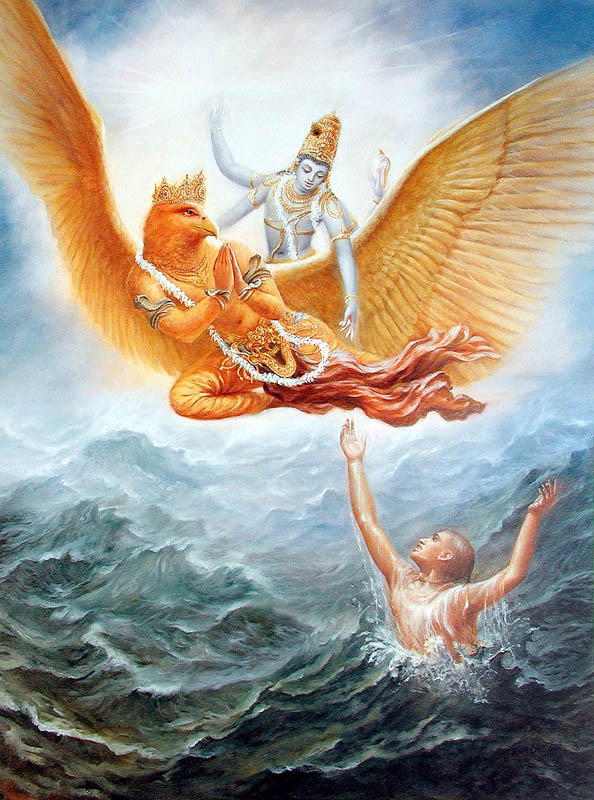 Freedom from suffering comes from bhakti, spiritual life.  Not only does bhakti destroy reactions to karmas of the past and destroys the desire for a materialistic life for future but also in the very present it reduced and eliminates suffering allowing the soul to experience itself on the spiritual platform.
As Jesus, while being taken to be nailed to the cross told the crying women on the street. “Women of Jerusalem, stop crying for me. Instead, cry for yourselves and for your children,”  For such a pure devotee and yogi does not suffer the pains of the body.

We all suffer only due to our own misdeeds and the Lord can free us completely from all suffering immediately in as much we give up the propensity to sin and exploitation.
Hare Krishna