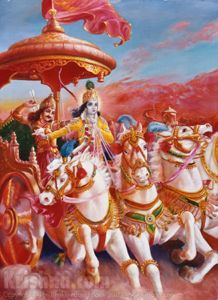 Today is celebrated as Gita Jayanti, the day on which the Bhagavad-gita was spoken by Krishna to Arjuna on the Battlefield of Kurukshetra. The Bhagavad-gita continues to be one of the world’s most popular and inspiring books, covering topics such as the immortality of the self, the origin of all existence, how to remain peaceful in the most trying circumstances, and the relationship between us and God.