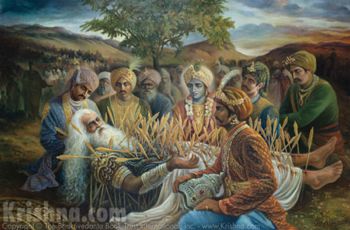 Bhisma-panchaka is a five-day period at the end of the month of Karttika (October-November), said to commemorate the last five days in the life of Bhisma, a key figure in the history of India. The Mahabharata and the Srimad-Bhagavatam describe Bhisma as a powerful warrior and commander-in-chief of the royal army who renounced his own claim to the throne of the world and instead remained celibate throughout his life.

Bhisma is also known as one of twelve mahajanas—authorities—in the science of devotional service to Krishna. In his youth, he received the benediction that he would only die when he wished to, and he spent his final few days giving spiritual and political instructions to King Yudhisthira while lying on a bed of arrows, mortally wounded, on the battlefield of Kurukshetra.