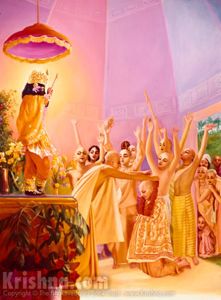 Krishnadas Kaviraja Goswami (1600s-1700s) is the author of Chaitanya-charitamrita, the most authoritative book on Chaitanya Mahaprabhu’s philosophy and later life. Kaviraja Goswami was a devotee of Krishna who lived in Katwa, a small town in the district of Burdwan, Bengal (India). After a family dispute about bhakti-yoga, devotional service to God, Nityananda Prabhu appeared to Krishnadas in a dream and told him to leave home and go to Vrindavan.

His samadhi (shrine) stands on the bank of Radha-kunda, in Vrindavan, India.

Image shows Krishnadas Kaviraj Goswami receiving Krishna’s blessings to write the Chaitanya-charitamrita – in the form of a garland falling from the Deity of Madan-mohan.