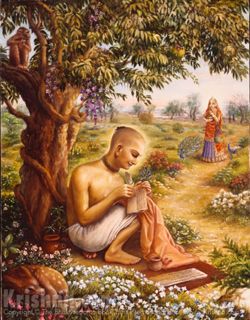 Rupa Goswami (1489-1564) is considered the chief among the six Goswamis of Vrindavan. A direct follower of Chaitanya Mahaprabhu, Rupa was renowned for his scholarship and devotion to Lord Krishna. Together with his elder brother, Sanatana, he served as a government minister of Bengal, India. After meeting Lord Chaitanya, the brothers dedicated their lives to Mahaprabhu’s mission by (1) uncovering Krishna’s lost places of pastimes; (2) installing Deities and establishing Their worship; (3) writing devotional literature; and (4) teaching the rules of bhakti-yoga, devotional service to God. Srila Rupa Goswami wrote many books, including Bhakti-rasamrita-sindhu (summarized by Srila Prabhupada as The Nectar of Devotion”). 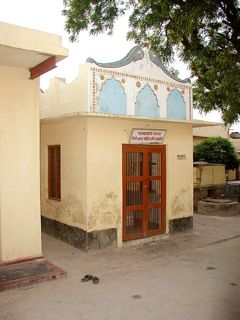 Photo of the samadhi (shrine) of Gauridasa Pandita courtesy of SivaramaSwami.com