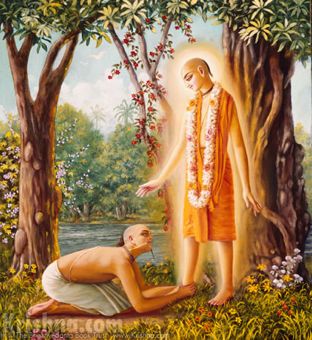 Sanatana Goswami (1488-1558) was the elder brother of Rupa Goswami and a direct disciple of Chaitanya Mahaprabhu. Together with Rupa, Sanatana served as a minister in the Muslim government of West Bengal, India under Nawab Hussain Shah. After meeting Mahaprabhu, Sanatana abandoned his post and devoted his life to spreading Krishna’s teachings through writing. Sanatana renounced all worldly pleasures and remained detached and always absorbed in his studies. He is known for his compassion for suffering, materialistic humanity. Among Sanatana Goswami’s significant literary contributions are Hari-bhakti-vilasa, Brihad-Bhagavatamrita, and Brihad-Vaishnava-toshani.

Painting shows Sanatana Goswami’s meeting with Chaitanya Mahaprabhu. Sanatana is presenting himself with straw between his teeth, a traditional expression of extreme humility.