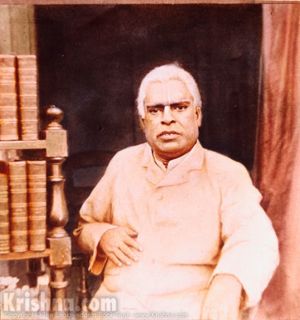 Srila Bhaktivinoda Thakura (1838-1914) was a pioneering spiritual leader, a magistrate working in colonial India under British rule, a prolific preacher, writer, and poet. One of his sons was Srila Bhaktisiddhanta Sarasvati Thakura, a highly influential spiritual leader in his own right, and the spiritual master of the founder of the Hare Krishna movement, His Divine Grace A.C. Bhaktivedanta Swami Prabhupada.

In the closing days of the nineteenth century, Bhaktivinoda Thakura was the one who reestablished the validity of the teachings of Chaitanya Mahaprabhu, which by then had been largely misrepresented or lost. Srila Bhaktivinoda Thakura wrote almost one hundred books to explain the science of Krishna consciousness. He worked tirelessly to expose pseudo-incarnations of God and defeat misconceptions about the path of devotional service.

Followers of Krishna consciousness generally observe Bhaktivinoda Thakura’s disappearance anniversary by fasting until noon, singing some of his many bhajans (devotional songs), and reading about his life.

Photo of Bhaktivinoda Thakura courtesy of the Krishna.com Gallery