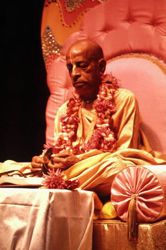 His Divine Grace A.C. Bhaktivedanta Swami Prabhupada departed from this world on November 14, 1977, in Vrindavan, India, in his rooms at the Krishna-Balarama temple, surrounded by hundreds of his disciples chanting Hare Krishna. Up until moments before his passing, he was dictating commentaries on the tenth canto of the Srimad-Bhagavatam.

“As part of his instruction and example, Srila Prabhupada knew he would have to show people just how to die. He had escaped death a number of times-by Krishna’s grace, by the prayers of his disciples, and by his own pure and powerful will to propagate his movement. But from the signs given to him by Lord Krishna in 1977, Srila Prabhupada began decisively and conclusively ending his mission in the material world. And among his final duties was his giving complete guidelines on how to die. He was perfectly showing how to do that which everyone has to do, but which is most difficult to do successfully: die.”