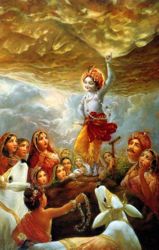 Govardhan-puja, the worship of Govardhan Hill, is a festival begun by Krishna Himself to honor a prominent feature of the rural land of Vrindavan, Krishna’s hometown. His father and the rest of the village elders had prepared a sacrifice for the demigod Indra, but Krishna suggested that they worship Govardhan Hill instead, since the hill was so integral to the livelihood and recreation of His cowherd community.

Indra himself was not pleased by this, and sent torrential rain intended to devastate the entire area of Vrindavan. In response, Krishna lifted Govardhan Hill and held it above His head for seven days, sheltering all the residents of Vrindavan from the deluge. After Indra apologized for causing such an inconvenience to Krishna and His townsfolk, they resumed worship of the hill, offering immense quantities of food in a festival, which is commemorated up to the present day by Krishna’s devotees.