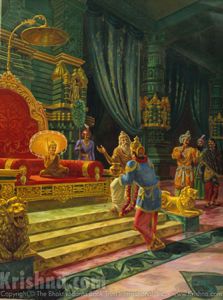 Vamanadeva is Lord Krishna‘s avatar (incarnation) as a dwarf brahmana during a period of intense conflict between the appointed directors of the universe (devas, or “demigods“) and asuras (“demons”). The Srimad-Bhagavatam tells how the asuras had violently assumed control and sent the demigods into hiding. As a trick to return the demigods their administrative posts, Vamanadeva begged three paces of land in charity from the leader of the asuras, Bali Maharaja. When Bali granted His request, Lord Vamana assumed such a gigantic form that with two steps He covered the earth and then the entire universe. For the third step, Bali Maharaja was then pleased to receive the Lord’s lotus foot on his head.

(pictured at right is Bali Maharaja surrendering to Lord Vamana)