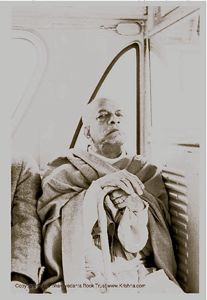 Today marks the anniversary of Srila Prabhupada‘s arrival in the U.S.A. in 1965.

Today marks the anniversary of Srila Prabhupada‘s arrival in the U.S.A. in 1965.

Several years after Srila Prabhupada first arrived in America, a disciple discovered the diary he had kept during his passage from India on the steamship Jaladuta. Inside was a poem, handwritten in Bengali, which Srila Prabhupada had written on board the ship just after it had arrived in Boston harbor. The poem beautifully captures Srila Prabhupada’s first impressions of Western civilization and reveals his heartfelt determination to change the consciousness of America. It begins:

“My dear Lord Krishna, You are so kind upon this useless soul, but I do not know why You have brought me here. Now You can do whatever You like with me.

“But I guess You have some business here, otherwise why would You bring me to this terrible place?

More from this diary entry. . .