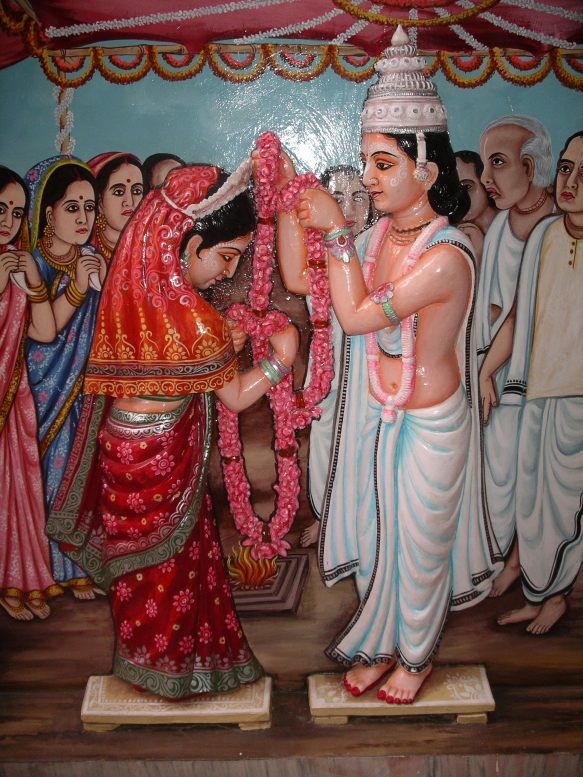 On all of Krishna‘s visits to the material world, He’s accompanied by His pleasure potency – His internal spiritual energy personified, in the form of Lakshmidevi or Srimati Radharani. As Krishna expands Himself into innumerable avatars, Srimati Radharani also has unlimited expansions to accompany Krishna everywhere. Srimati Vishnupriya Devi is one such expansion. She was the second wife of Chaitanya Mahaprabhu. About Srimati Vishnupriya, Srila Prabhupada says in Teachings of Lord Chaitanya:

“During his residence in East Bengal, His (Chaitanya Mahaprabhu’s) wife Lakshmidevi left this world from the effects of snakebite. On returning home, he found his mother in a mourning state. He consoled her with a lecture on the uncertainty of human affairs. It was at his mother’s request that he married Vishnupriya, the daughter of Raja Pandit Sanatana Mishra.”

And in the Introduction to Srimad-Bhagavatam:

“For His first twenty-four years He (Mahaprabhu) remained at Navadvipa as a student and householder. His first wife was Srimati Lakshmipriya, who died at an early age when the Lord was away from home. When He returned from East Bengal He was requested by His mother to accept a second wife, and He agreed. His second wife was Srimati Vishnupriya Devi, who bore the separation of the Lord throughout her life because the Lord took the order of sannyasa (renounciation) at the age of twenty-four, when Srimati Vishnupriya was barely sixteen years old.”

Pictured is a bas-relief sculpture of the wedding of Lord Chaitanya and Vishnupriya devi, from the wall of the Imlitala temple in Vrindavan, India