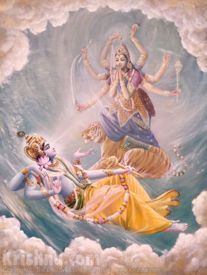 Yes and no. The engineer of the universe, Brahma, mentions Durga as Krishna’s illusory energy—Maya—in his collection of prayers to Krishna known as the Brahma-samhita. The commentary to Srimad-Bhagavatam, 11.2.48 discusses this:

“. . .the Brahma-samhita (5.44) says . . . Maya is like a shadow of the Supreme Personality of Godhead who serves Him in the creation, maintenance and annihilation of this world. Just as a shadow has no independent power of movement but follows the substance that casts the shadow, the illusory energy of the Lord has no independent power, but bewilders the living entities according to the Lord’s desire. One of Krishna’s opulences is that He is supremely detached; when a living entity wants to forget Him, Krishna immediately employs His illusory energy to facilitate the foolishness of the conditioned soul.”

Srila Prabhupada also identifies Durga-devi as Maya in his purport to Srimad-Bhagavatam, 3.23.57:

“Actually, the illusory, material energy is cheating everyone. People do not know what they are doing when they worship the material energy in the form of goddess Kali or Durga for material boons. They ask, “Mother, give me great riches, give me a good wife, give me fame, give me victory.” But such devotees of the goddess Maya, or Durga, do not know that they are being cheated by that goddess. Material achievement is actually no achievement because as soon as one is illusioned by the material gifts, he becomes more and more entangled, and there is no question of liberation.”

The name “Durga” doesn’t always refer to Krishna’s illusory energy by which we’re all bewildered in the material world. For example, the cowherd girls of Vrindavan, the gopis, prayed to Durga in order to get Krishna as their husband. The gopis are well known as Krishna’s dearest devotees, and certainly aren’t ignorantly seeking illusory happiness. In Srimad-Bhagavatam, 10.22.4, Purport, we see this commentary on Durga and Maya:

‘The Lord’s inferior potency, known as Durga, is dedicated to His loving service. Being the Lord’s potency, this inferior energy is nondifferent from Him. There is another, superior potency, whose form is on the same spiritual level as that of God Himself. Simply by scientifically understanding this supreme potency, one can immediately achieve the Supreme Soul of all souls, who is the Lord of all lords. There is no other process to achieve Him.

That supreme potency of the Lord is known as Gokulesvari, the goddess of Gokula. Her nature is to be completely absorbed in love of God, and through Her one can easily obtain the primeval God, the Lord of all that be. This internal potency of the Lord has a covering potency, known as Maha-maya, who rules the material world. In fact she bewilders the entire universe, and thus everyone within the universe falsely identifies himself with the material body.’

From the above we can understand that the internal and external, or superior and inferior, potencies of the Supreme Lord are personified as Yoga-maya and Maha-maya, respectively. The name Durga is sometimes used to refer to the internal, superior potency, as stated in the Pañcaratra: “In all mantras used to worship Krishna, the presiding deity is known as Durga.”

Thus in the transcendental sound vibrations glorifying and worshiping the Absolute Truth, Krishna, the presiding deity of the particular mantra or hymn is called Durga. The name Durga therefore refers also to that personality who functions as the internal potency of the Lord and who is thus on the platform of suddha-sattva, pure transcendental existence. This internal potency is understood to be Krishna’s sister, known also as Ekanamsa or Subhadra. This is the Durga who was worshiped by the gopis in Vrindavan. Several acaryas have pointed out that ordinary people are sometimes bewildered and think that the names Maha-maya and Durga refer exclusively to the external potency of the Lord.”