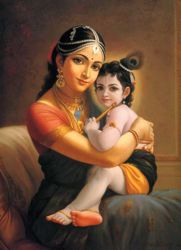 Krishna is the omnipotent, Supreme Person. He can appear however He likes, and He does so in unlimited ways in an unlimited number of forms. His name, “Krishna,” means that He is the most attractive Person, and that’s Who He is. He is the way He is, and appears the way He appears, for reasons of His own. We’re making a mistake if we think we can understand the motives of the Unlimited Supreme Being with our very limited, insignificant brains.

The color of His transcendental form is not a color of the world within our experience. Yet sometimes people nonetheless ask why He appears as He does, as if it could be explained in material terms, using material logic, to our materialistic mind. Krishna can’t be understood by our power of reason, logic, or imagination. The best we can do is to learn how to love Him. Then, maybe, by His grace only, can we begin to appreciate His qualities, as they are, without trying to grasp what cannot be grasped.

Since you asked, here’s what Srila Prabhupada and Srimad-Bhagavatam say on the topic you raise:

“The Supreme Personality of Godhead has a cheerful, lotus-like countenance with ruddy eyes like the interior of a lotus and a swarthy body like the petals of a blue lotus. He bears a conch, discus and mace in three of His hands.

“The color of the Personality of Godhead, Krishna, is described here as nilotpala-dala, meaning that it is like that of a lotus flower with petals tinted blue and white. People always ask why Krishna is blue. The color of the Lord has not been imagined by an artist. It is described in authoritative scripture.
In the Brahma-samhita also, the color of Krishna’s body is compared to that of a bluish cloud. The color of the Lord is not poetical imagination. There are authoritative descriptions in the Brahma-samhita, Srimad-Bhagavatam, Bhagavad-gita and many of the Puranas of the Lord’s body, His weapons and all other paraphernalia. The Lord’s appearance is described here as padma-garbharekshanam. His eyes resemble the inside of a lotus flower, and in His four hands He holds the four symbols: conchshell, discus, mace and lotus.”