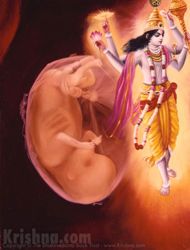 Abortion is a subject of heated debate; proponents demand, “Pro-choice!” while critics shout, “Pro-life!” But without being “pro-understanding”—of the self, the body, and the science of consciousness—how can we be properly equipped to make choices on such life and death matters?

Krishna begins His teachings in the Bhagavad-gita by explaining the difference between the self and the material body; the body has life as long as the spirit self is inside. As soon as the soul leaves, the body loses all symptoms of consciousness.

The embryo develops in the womb according to the same principle; it develops to maturity and exhibits consciousness because of the presence of a spiritual spark. Without the soul, the body would have no life at all. The idea that we have consciousness only at a certain stage of physical maturity is not accepted anywhere in Vedic literature. Consciousness may not be fully exhibited in early stages of pregnancy, but the ancient teachings fully describe not only the physical stages of the embryo’s development but also the mental life of an unborn child.

Taking the life of an unborn child is considered the same as taking any life, and there are grave karmic repercussions. Abortion may nowadays be considered an acceptable way to avoid the responsibility of childbirth and child-raising, but this is a tragic symptom of the widespread lack of spiritual understanding in the world.

The soul is eternal—it can never be killed (Bhagavad-gita 2.17). At the same time, the Vedas also tell us, “Don’t commit violence to anyone.” Every living being—plant, animal, and human—comes from the supreme living being, Krishna, and has a right to live.

In both those cases, the word “killing” is used (italics added), but in the case of abortion the word “termination” is used. The underlying assumption seems to be that the unborn aren’t really “alive”; their inexplicable growth and development have nothing at all to do with the presence of consciousness, so “terminating” them doesn’t involve “killing”—any more than removing a tumor does.

Curiously, abortion is also defined as “the expulsion of a nonviable fetus” in the same dictionary that defines “nonviable” as “not capable of living, growing, or developing and functioning successfully”; yet all evidence indicates that fetuses have always lived, grown, developed and functioned quite successfully within the womb.

We like to quote our sources. This page is based on the following: