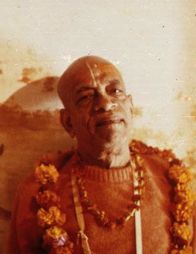 His Divine Grace A.C. Bhaktivedanta Swami Prabhupada (1896-1977), the founder-acharya* of the International Society for Krishna Consciousness (ISKCON), was the foremost proponent and teacher of Krishna consciousness—devotional service to the Supreme Person, Krishna—of the late twentieth century.

Srila Prabhupada, as he’s known to his followers, translated and commented on over eighty volumes of the most important sacred bhakti texts. His books include Bhagavad-gita As It Is—the definitive commentary on Krishna’s advice on how to be happy in this life and the next, and the multi-volume Srimad-Bhagavatam—a history of Krishna’s activities, His avatars, and His many devotees throughout the universe. Srila Prabhupada also constantly traveled the world, initiating thousands of disciples and managing a global spiritual movement which continues to grow today.

After forty years of struggling within India to carry out his guru’s order while maintaining family and business responsibilities, Srila Prabhupada accepted the renounced order of life, sannyasa. He began writing translations and commentaries on the great Srimad-Bhagavatam, the cream of all Vedic literature. After producing three volumes, he boarded a steamship bound from Calcutta to New York City in 1965.

At the age of sixty-nine, with forty rupees and a trunk of his Bhagavatam commentaries—the first ever in English—his aim was to introduce “India’s message of peace and goodwill” to the western world. During the last twelve years of his life, Srila Prabhupada would inspire thousands of Westerners and Indians to devote their lives to Krishna consciousness, launching one of the fastest-growing spiritual movements in the history of the world.

He considered his translations and commentaries as divinely inspired, practical guidebooks for the spiritual and material benefit of human society. Scholars familiar with his books regard Srila Prabhupada as a genuine, realized, and scholarly teacher of bhakti. His definitive writings have become standard university texts.

With the help of his students, he founded the International Society for Krishna Consciousness (ISKCON). ISKCON is popularly known as the “Hare Krishna” movement, due to its members’ widespread practice of chanting the Hare Krishna mantra in public. Srila Prabhupada intended ISKCON to facilitate the association and training of bhakti-yoga practitioners, and his followers continue to spread that mission.