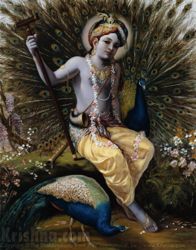 Krishna is a name of the original, unique Supreme Person, the source of all existence. God has many names, and each describes a different aspect of His personality. Allah, Vishnu, Jehovah, and God refer to His greatness and His role as creator, maintainer of the universe, and Lord of all. The name Krishna—”the all-attractive one”—indicates the unequaled charm and beauty of the Supreme Person, as He appears to His most dear devotees.

Krishna appears as other forms of God—avatars—to create and maintain the universe, while He simultaneously enjoys loving relationships with His countless associates in the spiritual world. He visits this material world from time to time to free His devotees from material existence and to vanquish the wicked. He performs superhuman pastimes—lifting mountains, swallowing forest fires, and killing numerous extraordinarily powerful demons—as easily as a child playing with toys.

Krishna talks about Himself in the Bhagavad-gita, explaining how anyone can know Him through Krishna consciousness, bhakti-yoga. The Srimad-Bhagavatam further describes Krishna’s uncommon and fascinating personality and activities in its Tenth Canto.

Krishna is the source of brahman, the all-pervading spiritual energy which includes everything and everyone. We are all one with Krishna, in the sense that we are all parts of the supreme whole. He is also present in every atom, as well as in the hearts of all living things as Paramatma, the Supersoul. But ultimately, Krishna is Bhagavan, the Supreme Person who possesses all opulences—wealth, strength, fame, knowledge, beauty, and detachment—to the fullest degree.

Realization of Krishna progresses in three stages; first comes an understanding of His all-pervading brahman feature, then one realizes His presence within one’s self and others as Paramatma, and finally one comes to appreciate Krishna as He is, as Bhagavan, the all-attractive Supreme Person, the ultimate cause of all causes, the source of all of us and of being itself.

Krishna always appears as a fresh youth with a dark complexion, surrounded by loving devotees, decorated with garlands of flowers and peacock feathers in His curling, bluish-black hair. He plays as a cowherd boy in the rural setting of Vrindavan, along with countless other cowherd boys, gopas, and cowherd girls, gopis. In His pastimes as a small child, He captivates the minds of the residents of Vrindavan with His charming, naughty behavior, such as stealing butter. In His youth, He captures the hearts of the gopis by His irresistible beauty, charm, and flute playing.

The greatest personalities of ancient times, such as Narada, Asita, Devala, Vyasadeva—who compiled the Vedas—and Arjuna, to whom Krishna spoke the Bhagavad-gita, all accept Krishna to be the Supreme Person, the Absolute Truth, the ultimate source of all energies, and the One ultimately responsible for the creation, maintenance, and annihilation of everything in the material world.