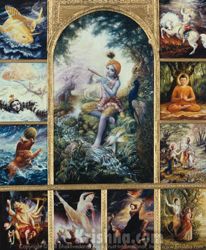 Avatar, “one who descends,” refers to one of the Supreme Person’s many incarnations or expansions who periodically visit the material world.

Krishna Himself, or one of His empowered representatives, comes in every age in order to free His devotees from repeated birth and death and to vanquish the wicked. Avatars either fully or partially possess God’s omnipotence, and they act in extraordinary ways to attract the interest of the residents of this world.

There are various types of avatars. Krishna expands into three Vishnu forms, purusha-avatars, to create and maintain the universe. He also comes here in His original form, as Krishna, the Supreme Personality of Godhead, or in such forms as Rama, Nrsimha, Varaha, and Kurma to perform uncommon pastimes, or lilas, for which they are known as lila-avatars.

In each of the great cosmic ages, yugas, God appears as a yuga-avatar to teach the prescribed religious principles, dharma, of the particular age. He also empowers His representatives—prophets, saints, and messiahs—for this purpose. Such empowered personalities, shakty-avesha avatars, are not God Himself but have the divine ability to influence others to become God conscious.

The Supreme Person appears many times, in many places, and in many forms throughout history. He is known by many names in many languages, and teaches religious principles according to time, place, and circumstances. The most recent avatar of Krishna is Chaitanya Mahaprabhu, Who taught that congregational chanting of God’s names is the prescribed spiritual practice for the present age.

(The painting shows Krishna surrounded by some of His prominent avatars)