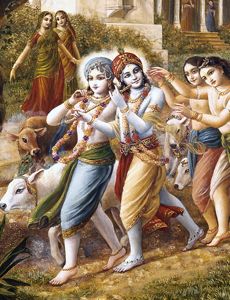 The Supreme Person appears in innumerable forms to enjoy transcendental relationships. Some of His expansions are tiny, dependent beings, like us, and some are complete and omnipotent beings like Himself.

When Krishna desires to appear in this world as an avatar, Balarama arranges for that appearance by expanding Himself into more forms of God. During Krishna’s pastimes on earth, Balarama was present as His elder brother. The Srimad-Bhagavatam describes Their superhuman activities in the village of Vrindavan and the city of Dwaraka.

(Pictured are Balarama and Krishna with Their friends and cows in Vrindavan.)