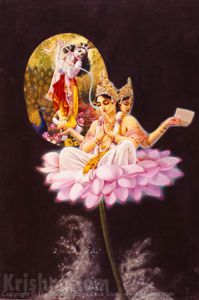 Brahma is the title given to the engineer and manager of the universe. He is the first created entity within the universe.

The Supreme Person Krishna, in His role as Vishnu, creates the material world. He then empowers a Brahma to act as the engineer and manager within each universe. Of all the demigods in charge of generating various species of life and managing universal affairs, Brahma is the chief.

Brahma is also the original spiritual mentor of everyone within the universe. Krishna entrusts him with the sum total of all knowledge—the Vedas—by which everyone can attain success in life and ultimately return to the spiritual world. Brahma, in turn, sees to it that Vedic knowledge is spread everywhere by his representatives. This mission is known as the Brahma-sampradaya, or school of theistic thought originating from Brahma.

Brahma’s birth is an extraordinary event occurring at the beginning of creation. Vishnu lies down within the universe and manifests a lotus flower from His navel, the stem of which contains all the planetary systems. Brahma appears on top of this lotus flower and performs prolonged meditation before beginning his work. The Bhagavad-gita says that Brahma lives for hundreds of trillions of years.

Whenever a crisis arises within the universe that the administrative demigods can’t solve, Brahma approaches Vishnu for assistance. The Srimad-Bhagavatam reveals Brahma’s close relationship with the Supreme Person, and includes some of Brahma’s prayers, which are extraordinary insights into transcendental reality.