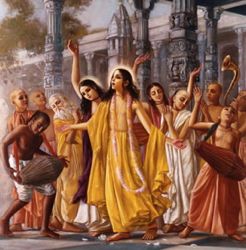 Chaitanya Mahaprabhu appeared as a devotee of Krishna in Mayapur, West Bengal, India in the late fifteenth century. He introduced sankirtan, widespread congregational chanting of the Supreme Person’s names, as the most effective means by which anyone can achieve spiritual perfection. By His influence, many of India’s leading religious scholars and their followers became devotees of Krishna themselves.

In His youth, Mahaprabhu started a Sanskrit academy in Navadvipa—one of India’s top centers of learning at the time—and earned a reputation as an excellent scholar. But at age twenty-four he renounced everything to travel the subcontinent, encouraging everyone he met to chant the Hare Krishna mantra.

He is considered by disciples, scholars and followers to be the latest avatar of Krishna Himself, based on extensive evidence found in Vedic literature. The International Society for Krishna Consciousness, ISKCON, is a continuation of Chaitanya Mahaprabhu’s sankirtan movement.

Mahaprabhu’s humble, saintly demeanor and knowledge of Vedic conclusions persuaded prominent impersonalists that Krishna consciousness, worship of the Supreme Person, is life’s highest purpose. On Mahaprabhu’s instruction, the Six Goswamis of Vrindavan made a thorough analysis of the Vedas to show that Krishna bhakti, devotional service to Lord Krishna, is the essence of all Vedic teachings. Mahaprabhu’s extensive conversations with His devotees such as Ramananda Raya and Sanatana Goswami form the philosophical and scriptural basis of Gaudiya Vaishnavism, or Krishna consciousness.

Chaitanya himself left only eight written verses, the Siksastaka, in which he teaches that chanting God’s names is the most simple and sublime spiritual practice for everyone, everywhere. He also showed such extraordinary symptoms of love of God that great scholars among His devotees, including the Six Goswamis, have cited considerable scriptural evidence indicating that Chaitanya Mahaprabhu is Krishna Himself appearing as His own devotee.

Image shows Chaitanya Mahaprabhu chanting in sankirtan with His associates.