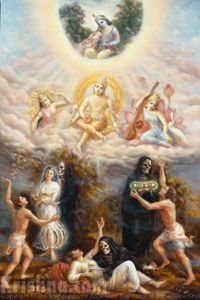 Demigods and demigoddesses are often mentioned in Vedic literature as the extraordinarily powerful controllers of the material world. The Supreme Being, Krishna, doesn’t directly manage the affairs of the universe; He appoints other qualified living entities—His devotees—to act on His behalf.

For example, Krishna entrusts Brahma with creating the universe and Shiva with annihilating it. Krishna’s expansion, Vishnu, takes charge of its maintenance, but in a “hands off” style; He posts other demigods to look after the various aspects of universal management.

The Vedas sometimes encourage worship of demigods as a reward system to encourage pious activity. People desiring temporary, material benedictions worship demigods, with the goal of with goal of enjoying worldly, heavenly pleasures in this life and the next.

In the Bhagavad-gita, Krishna discourages such materialistic worship, reminding us that such benedictions, like the demigods themselves, are limited and temporary. He recommends that anyone seeking true, lasting happiness should worship Him instead, since He’s the ultimate source of all benedictions and demigods anyway.

The painting depicts Krishna as the ultimate source of the demigods’ power, and how any benedictions given by the demigods are taken away at the time of death.