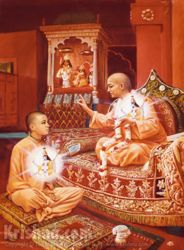 People these days call any kind of expert a “guru,” but for our purposes guru means a spiritual master, a teacher of Krishna consciousness, considered in relation to his or her disciple or student.

In the Bhagavad-gita, Krishna recommends the guru-disciple system—parampara—as the most reliable means of passing down spiritual knowledge. He suggests that anyone seeking the Absolute Truth should approach a guru with humility, relevant questions, and a service attitude.

A spiritual master’s responsibility is to help the disciple reestablish his or her relationship with Krishna by engaging them in various kinds of devotional service, such as chanting the Hare Krishna mantra. A genuine guru presents Krishna’s teachings exactly as they’ve been passed down through the parampara system. Anyone can become a spiritual master, provided they strictly follow their own guru and understand the science of Krishna consciousness.

There are varieties of gurus. Anyone giving Krishna conscious instruction is known as a siksha-guru. One who shows the path of Krishna consciousness is called the vartma-pradarshaka or patha-pradarshaka guru. The spiritual master who gives initiation is known as the diksha guru. One may have many siksha gurus but only one diksha guru. Usually, the person who gives us the most instruction later on becomes our initiating guru.

The spiritual master is offered all the respect given to Krishna. As far as the disciple is concerned, the guru is Krishna’s direct representative, and therefore as good as Krishna Himself. Krishna instructs us from within our hearts as Paramatma, Supersoul, and the spiritual master is considered to be the external manifestation of Supersoul.

In the International Society for Krishna Consciousness, many devotees have accepted the duty of initiating disciples. Srila Prabhupada—the founder-acharya of ISKCON—wanted all of his disciples to become qualified gurus.