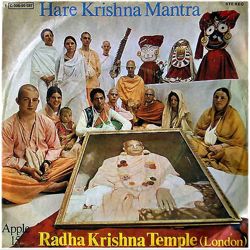 The Hare Krishna mantra is a chant meant for enhancing consciousness to the greatest possible degree. Chanting the Hare Krishna mantra can give peace, happiness, God realization, freedom from repeated birth and death, and total self-fulfillment. Also known as the maha-mantra—great chant—it consists of three Sanskrit names of the Supreme Being; “Hare,” “Krishna,” and “Rama.”

The mantra is most commonly translated as, “O Lord, O Energy of the Lord, please engage me in Your service.” It was popularized in the sixteenth century by Chaitanya Mahaprabhu, and spread worldwide in the late twentieth century by Srila Prabhupada and his followers in the International Society for Krishna Consciousness.

One of the Vedas’ most quoted texts, the Padma Purana, says that the maha-mantra is Krishna Himself, appearing in the form of His name. Chanting Hare Krishna is meant to uplift us from the negative effects of this age of quarrel and hypocrisy, Kali-yuga, and bring us back into Krishna’s association.

Chaitanya Mahaprabhu taught that the practice of chanting Krishna’s names gives one all spiritual good fortune. Other benedictions—house by the sea, fancy new car, etc.—may or may not come, but chanters of Hare Krishna throughout history say the benefits of chanting greatly exceed any temporary blessings available on earth.

The Padma Purana goes on to say that the maha-mantra is the purest of the pure, and contains all of reality—the Absolute Truth in the form of sound. It’s also eternally liberated—not of this world—having descended directly from the spiritual world.

According to the logic of the Absolute Truth, Krishna and His name are the same; He is totally identical with the sound vibration of His name. By the same logic, He is personally present on the tongue—and in the heart—of anyone sincerely chanting His name with affection.

God is all-powerful, and so is His name. This mantra puts you directly in touch with the most powerful force in the universe. Don’t take our word for it, though. Try chanting for yourself, and see the difference it makes in your life.