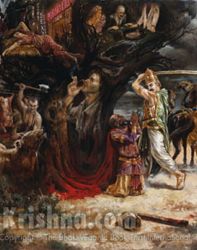 Kali-yuga, the Age of Quarrel, is a period of time lasting 432,000 years and characterized by hypocrisy, degradation, and an overall rise in vice. It is the last and worst of the four great ages (Satya-, Treta-, Dwapara-, and Kali-yugas) mentioned in ancient Vedic literature. We’re now living in a Kali-yuga that began around five thousand years ago.

The sole redeeming feature of Kali-yuga is that anyone can be released from degradation and anxiety simply by chanting God’s names. Chaitanya Mahaprabhu, who is Krishna Himself in disguise during Kali-yuga, encouraged everyone to chant the Hare Krishna mantra. Many scriptures recommend this chant as the most direct route to genuine happiness and enlightenment in the Age of Kali.

The painting depicts the vices of Kali-yuga and the arrest of Kali personified. (see Srimad-Bhagavatam, 1.17).