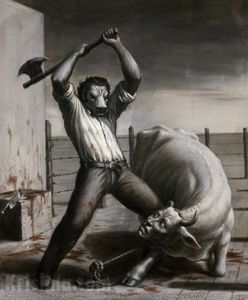 Karma generally means the cause and effect of our thoughts and actions. But the word karma has several connotations. It can mean an action, its reaction, or the whole system of action-reaction known as the law of karma.

“Do unto others as you would have them do unto you” and “what goes around, comes around” are common ways of talking about karma. Basically, our good or bad actions determine our good or bad future. Our quality of life, in terms of such things as health, wealth, intelligence, and physical appearance, is the result of our previous karma, actions.

We can change our karma from good to bad (or bad to good) by changing our activities. But any karma is bad from the spiritual point of view. In our natural, free condition, the spirit self, atma, isn’t meant to live under strict karmic laws. Good and bad karma is what forces us to endure repeated birth and death. This upsetting process forces us into a succession of “good” or “bad” temporary bodies, in an environment characterized by constant upheaval—the material world—that’s alien to our eternal spiritual nature. But karma is not something we have to be stuck with forever.

Krishna gives a thorough explanation of karma in the Bhagavad-gita, where He also explains akarma, inaction, and vikarma, actions that go against natural laws. He says that rather than endlessly trying to improve our karma, we should try to become free from karma entirely. This is a major theme of the Gita. Freedom from karma means liberation from the cycle of birth and death. This requires a revolution of consciousness, from self-centered (lower case “s”) to Supreme Self-centered.

As parts of the supreme whole, we’re meant to act in accord with the supreme will, like a finger is meant to act in harmony with the body as a whole. As long as we think we’re separate from God and act independently, with our own benefit in mind, laws of karma dictate whether we enjoy or suffer as a result.

But if we practice acting in service to the Supreme Person, Krishna—and we’re guided by genuine spiritual authority—we can consistently enjoy the same kind of freedom from karma that Krishna Himself enjoys, without any negative consequences to our actions. Krishna is the supreme enjoyer; He can do as He likes, and everything He does is free from adverse reactions. When we act in harmony with His will, we get spiritual happiness rather than material reactions.

Krishna says, (Bg. 3.9), “Work done as a sacrifice for Vishnu (God) has to be performed; otherwise work causes bondage in this material world. Therefore . . . perform your prescribed duties for His satisfaction, and in that way you will always remain free from bondage.”