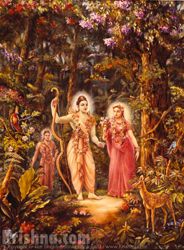 Ramachandra, or Lord Rama, is one of the Supreme Person’s many avatars on earth. He appeared during a previous age, Treta-yuga, and ruled as emperor of the world. A chronicle of His activities is presented extensively in the epic Ramayana, and concisely in the ninth canto of the Srimad-Bhagavatam, a biography of Krishna‘s many incarnations.

Ramachandra’s life is considered to be exemplary in every way. Followers of India’s Vedic culture see Him as the ideal king, the most powerful warrior, and the most faithful husband. It is said that He ruled His kingdom just as a loving father cares for his children. Lord Rama’s nobility, integrity, decency, and virtue are spoken of with reverence even today.

He appeared as the eldest son of Maharaja Dasarath, along with brothers Bharata, Lakshmana, and Shatrughna—also incarnations of the Supreme Person. He married Sita devi, daughter of King Janaka, after breaking the bow of Siva in the contest for Sita’s hand. On the day of Ramachandra’s coronation, however, due to royal intrigue, He was banished to the forest for fourteen years, and Lakshmana and Sita accompanied Him there.

Ravana, king of Lanka, kidnapped Sita when Rama was absent from Their forest home. Subsequently, Rama and Lakshmana organized an army of forest-dwelling simians, vanaras—including the great devotee Hanuman— to attack Lanka. He then killed Ravana, rescued Sita, and triumphantly returned to His capital city, Ayodhya.

Image shows Laksmana, Rama, and Sita in the forest during Their exile from Ayodhya.