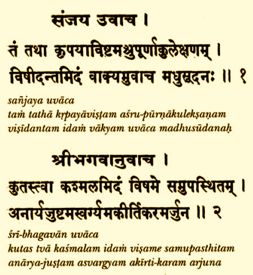 Sanskrit is the ancient language the Vedas were composed in. It is the root of many Indian languages, and continues to be used as a language of religion and scholarship. Spiritual writings such as the Bhagavad-gita, Srimad-Bhagavatam, the Upanishads, and Vedanta-sutra, as well as epic historical poems like the Mahabharata and Ramayana, are composed in Sanskrit.

Its written form is known as Devanagari, “language of the cities of the demigods.” Sanskrit is a precise and complex language, with rules that require years of training to learn. Some scholars consider it the mother of all Indo-European languages.

(Image at right shows a sample of Sanskrit Devanagari script with Roman transliteration, from Bhagavad-gita As It Is)

The foremost Vedic scholar and teacher of the modern era, His Divine Grace A.C. Bhaktivedanta Swami Prabhupada, wrote over eighty volumes of Sanskrit translation and commentary. Aware that his reading audience would likely include scholars as well as spiritual seekers, he set publishing standards that would establish the authenticity of his literary work. Each of his books includes the Devanagari script for each Sanskrit verse, Sanskrit-English word-for-word equivalents, a standardized Roman transliteration of each Sanskrit consonant and vowel sound, and a Sanskrit pronunciation guide in the glossary.

More information on Sanskrit can be found at Sanskrit.org