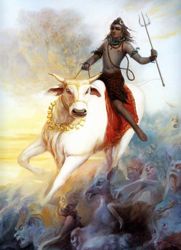 Shiva, “The Auspicious One,” is one of the primal controllers of the material world. He is known as the greatest Vaishnava—devotee of Vishnu—and Shiva is Krishna’s unique agent for overseeing the mode of ignorance within material creation.

He is considered one of the twelve mahajanas, authorities on devotional service to Krishna, and he is in charge of destroying the universe at the time of annihilation. He is the husband of Durga (a.k.a. Maya, Uma, Parvati, Sati, etc.), Krishna’s material energy personified.

Shiva is neither an ordinary living entity, jiva, nor a typical demigod. He is in his own category of existence, known as shiva-tattva. He is almost on the level of Vishnu, but because of his interaction with material nature he is not counted as vishnu-tattva, the category of Godhead.