From 1966 until his passing in 1977, Srila Prabhupada’s life was one of almost constant intercontinental travel: meeting world leaders, perpetually giving lectures and interviews, providing spiritual guidance for thousands of young disciples, and overseeing almost all aspects of managing a global spiritual movement. Yet he considered book publishing his life’s mission.

Wherever in the world he was, he would rise many hours before dawn each day and devote his full attention to translating and composing commentaries on the Vedas’ most sacred texts. Some of his major literary works include:

When composing his own purports, Srila Prabhupada routinely consulted and included insights from other important authorities’ commentaries, including the work of Baladeva Vidyabhushana, Rupa Goswami, Vishvanatha Chakravarti Thakur, Sridhara Swami, and others.

His books, now published by the Bhaktivedanta Book Trust in 57 languages, now comprise over 80 volumes, with over a billion copies sold. 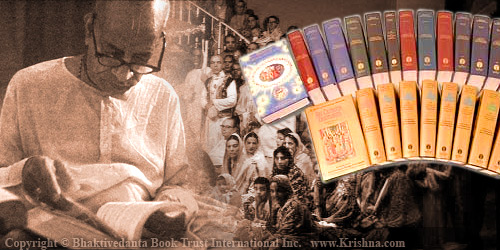