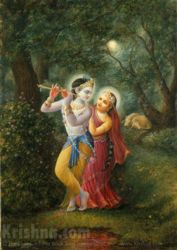 During Krishna’s childhood pastimes in Vrindavan, Radharani is His feminine counterpart. The Srimad-Bhagavatam and the books of the Six Goswamis of Vrindavan tell how They eternally enjoy each others’ company and are always making plans to meet.

Srila Prabhupada, in his commentary on Srimad-Bhagavatam, cautions that although Krishna and Radharani’s relationship may appear like romantic dealings between young boys and girls, it is purely transcendental; there are spiritual prerequisites for properly understanding it. In his summary study of the Tenth Canto – Krishna, the Supreme Personality of Godhead – Srila Prabhupada recommends that an aspiring devotee of Krishna thoroughly study the Bhagavatam’s first nine cantos – which stress the greatness of God and His divine energy – before delving into the more intimate, confidential pastimes found in the Tenth Canto.

Radharani also appears in the Hare Krishna mantra as “Hare (ha-RAY),” the vocative form of “Hara.” Hara is the feminine form of Hari, another name of Krishna. Her name appears before Krishna’s in the mantra because She’s known for Her compassionate nature; devotees of Krishna approach Her before approaching Him.