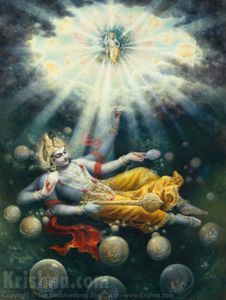 Vishnu is a form of the Supreme Person, described in the Srimad-Bhagavatam as an extraordinarily beautiful male with a dark bluish complexion, decorated with dazzling, spiritual gems, and four hands—holding a club, conchshell, chakra (disc), and lotus flower.

When Krishna, the original Personality of Godhead, wishes to create the material world, He expands Himself into three Vishnu forms to do so. 1) Maha-Vishnu creates innumerable universes, 2) Garbhodakashayi Vishnu enters each universe and creates all the planetary systems, and 3) Ksirodakashayi Vishnu enters the hearts of all beings, as well as into each atom of the universe.

In the Bhagavad-gita, Krishna explains that the ultimate goal of the mystic yoga system is to fix one’s mind on the form of Vishnu within the heart. By doing so, one can transfer himself to the spiritual world, which is beyond all the material universes. A unique form of Vishnu presides over each planet there and is eternally served with great reverence and affection by countless devotees.

The painting depicts Krishna (top right) expanding Himself into Vishnu forms in the course of manifesting the material universes.