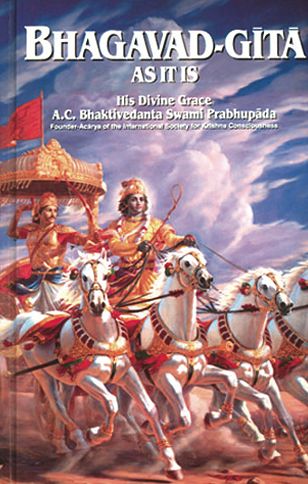 The Bhagavad-gita has been translated many times since Krishna spoke it on the Battlefield of Kurukshetra thousands of years ago. Srila Prabhupada chose “Bhagavad-gita As It Is” as the title for his own translation and commentary, first published in the late 1960s. It has since attracted a worldwide following of spiritual seekers and scholars of Vedic culture.

Srila Prabhupada’s aim in presenting this edition was to explain Krishna’s words straightforwardly. Faithful to the spiritual tradition established by Krishna Himself, Prabhupada’s commentary makes it possible for his readers to understand the Gita in its original devotional context. 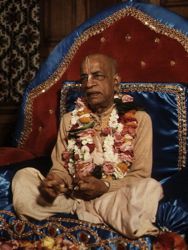 For example, Krishna says, “surrender unto Me” (18.65), and “I am the source of all material and spiritual worlds” (10.8). Srila Prabhupada, a lifelong devotee of Krishna, plainly explains these statements: God is the origin of everything—including ourselves—and we’re all God’s inseparable parts, meant to cooperate with Him. Most commentators, lacking the devotional credentials required to understand Krishna’s statement, “only by devotion can I be understood” (18.55), attempt to “explain” His words by claiming He didn’t really mean what He said.

For example, one (in)famous Gita commentary tells us, “it is not to Krishna that one must surrender, but to the eternal, unborn within Krishna.” Examples abound of such indirect interpretations which only muddle the direct meaning of the text. Considering this, it’s no surprise that Bhagavad-gita As It Is has uniquely inspired so many of its readers to more deeply investigate the spiritual dimension of their lives.